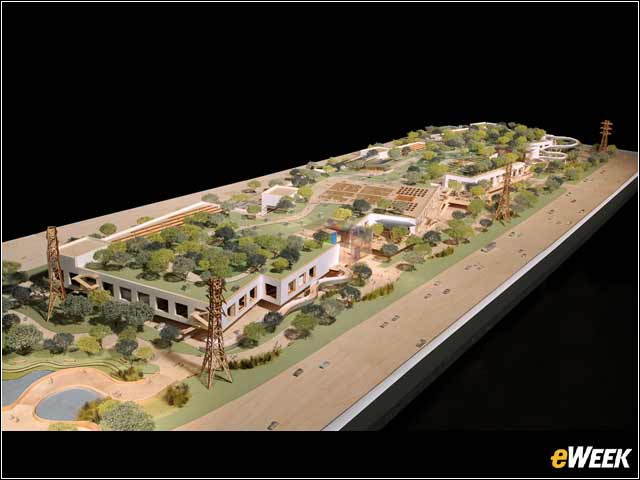 Some of the world’s biggest companies are designing and building World Headquarters. These are not just your run-of-the-mill buildings, rather they are unbelievable in scope and design. AND the companies we analyzed are taking dramatically different approaches. Enjoy the designs, thoughts behind them, and a more intimate understanding of the companies themselves.

First up is Facebook. Over the past quarter, Facebook spent over $200 million on the DESIGN ALONE.  Surprisingly though, when this headquarters is completed, you could drive by and not even know it. We have included three different articles on this $1.74 billion dollar project (yes $1,740,000,000,000 dollars). Here are some highlights:

–The campus will hold just over 9,000 employees. Spending almost two billion dollars for 9,200 employees seems excessive.
–The low-rise campus will have a rooftop park stretching the entire building.
–The buildings will be raw and unfinished (you would think you could finish a building for this amount of cash).
–The environment will be all open and collaborative.
–Scroll down for a large number of renderings and my highlights.

Over the next five weeks you will get to see some incredible buildings AND how different the visions are. This project is pretty understated…Some of the others are not. Next week I will show you Amazon’s new headquarters. A final thought and a shameless self promotion while we are on the topic of Facebook. Click here to go to our Facebook page and “Like” us. Thank you.

In an age where cities hire architects to design new icons to lure tourists or boost civic pride, and corporations erect skyscrapers that top out at dizzying heights, one of the world’s most valuable technology companies known for its global influence, brash young CEO and forward-thinking attitude has settled on a new headquarters building that will remain largely hidden from passersby. Social media behemoth Facebook’s decision seems even more counterintuitive considering the architect tapped to design the HQ: Frank Gehry, arguably the world’s most famous architect and known more for his flamboyant, steel-clad structures that range from an iconic museum in Bilbao, Spain, to an 860-foot residential skyscraper towering over the Lower Manhattan skyline. CEO Mark Zuckerberg reportedly insisted on a low-key design, which will be largely hidden from the highway that passes in front of it. Parking will be consolidated underneath the new structure, and a sprawling green roof with grass and trees will help it blend into the surrounding landscape. Gehry’s flourishes can be seen in the renderings, but it’s a far cry from his band shell in Chicago or the Walt Disney Concert Hall in Los Angeles—which is exactly what the world’s most ubiquitous tech company wanted, as it turns out. 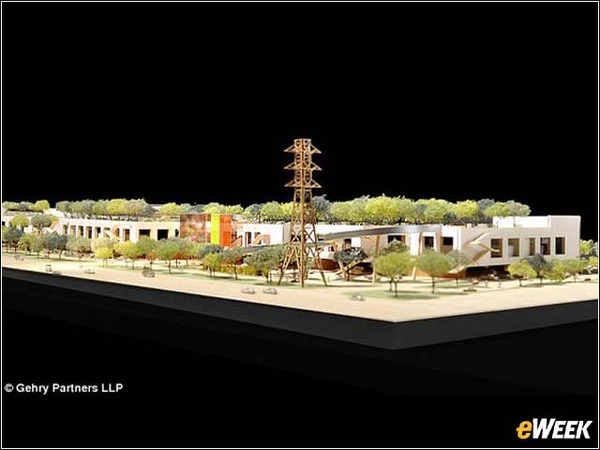 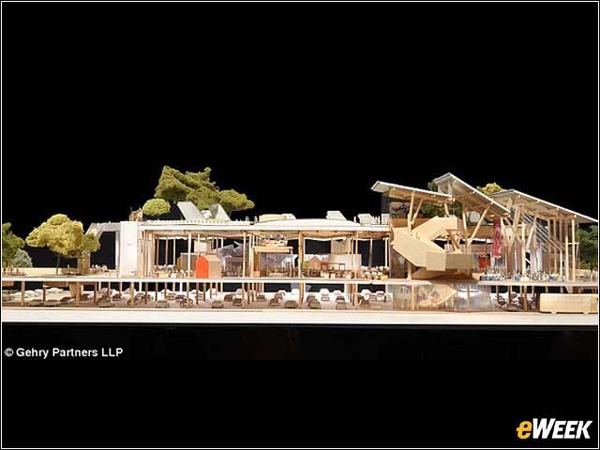 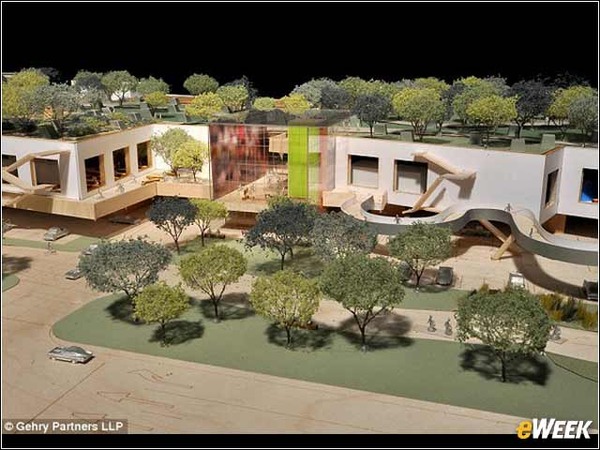 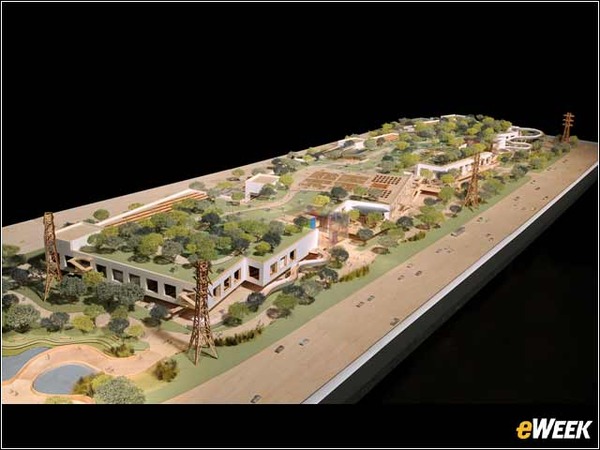 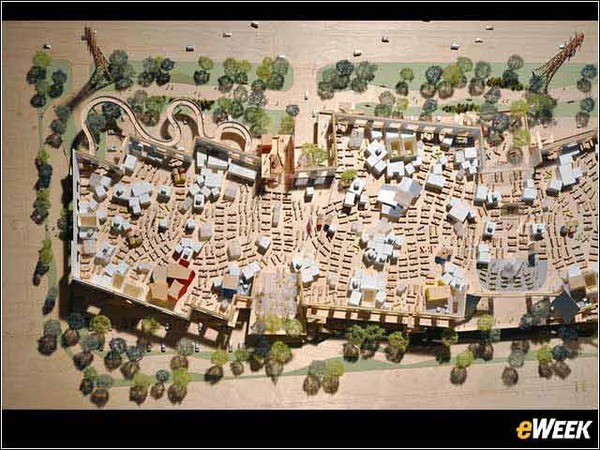 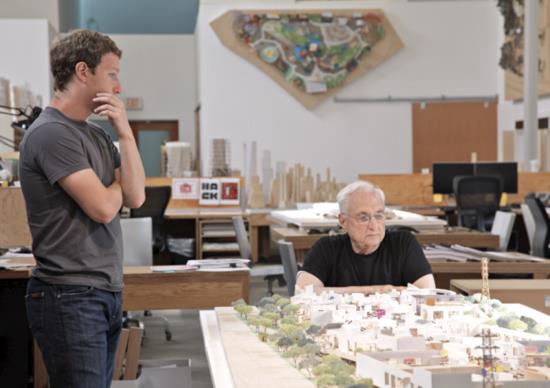 It is reported that after the expansion…Facebook headquarters will be divided into East and West two parks…across Bayfront Expressway. East Park will accommodate 6,600 employees, West Park [will] accommodate 2,800 employees. Facebook has hired Gary Architects (Gehry Partners) to be responsible for the design of the new park…the new park will provide Facebook staff a spacious and bright working environment. It is worth mentioning that Zuckerberg has told Gehry Architects [to] design as far as possible…the wall at right angles, to ensure that the staff in the room do not feel too depressed.

Facebook official blog said the new headquarters building will be…like a warehouse from the partial perspective. [The] desk of each employee will be placed in the spacious open space…the new building will be equipped with numerous small cafes and snack-equipped kitchen…employees can walk from one side to the other side, and the whole process will not encounter a door. Additionally, every corner of the new headquarters has a whiteboard and sofa, to help employees better rest and record the inspiration…

…it is said the actual construction cost overruns 1.74 billion.

The social media giant is building a campus that will look more like a park than an office. Why?

The design of the building can tell us a lot about how Facebook sees itself and about how it wants us to see it. They picked a superstar Pritzker-winning architect — and this starchitect in particular — to redo their campus. Looking at the plans can help us figure out what Facebook wants us to think it is. It can help us figure out what Facebook is in fact.

What does Facebook want us to believe it is? 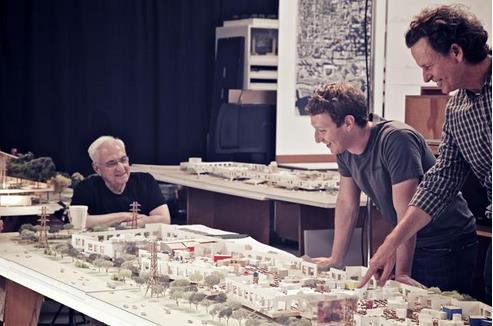 Let’s look at the official Facebook explanation of how the company came to pick Gehry and what they were thinking about when they worked with him on the design. The communication from the company’s “Environmental Design Manager” indicates a level of casualness that’s tough to buy when you’re talking about a major tech company that’s about to make a multi-million-dollar infrastructure purchase. On the Gehry selection:

A few months ago, I flew down to Los Angeles to meet for the first time with Frank and his team. His office is a giant warehouse overflowing with handmade, wooden models juxtaposed with state-of-the-art architecture software (some of which is designed by Frank’s in-house team). His teams are filled with people who are unbelievably talented and love what they do. The whole thing reminded me of Facebook, so that when I met Frank, I already knew he was a perfect fit for us.

Facebook wants us to know that its values are Gehry’s values. Further evidence of a creative mind-meld: Gehry works in a warehouse; later, we hear that this design that so shares Facebook’s values will be like a “warehouse.” Facebook isn’t just saying we really get along with our architect. It’s identifying the type of creativity that it takes to run and grow a successful social media company with the type of creativity it takes an artistically serious architect like Gehry to design a building. The comment about wooden models is also a gesture at the valuation of craft — a central part of the artist’s work – that puts it on par with “state-of-the-art” software. Why might Facebook want to associate itself with tactility, with craft, and with the physical world — all those things that the Internet has been accused of disappearing?

Facebook is deliberately trying to project an image — an interesting one, and a bit of a devious one. Two ideas come up repeatedly in as the communication continues. The buildings are environmentally friendly, and also integrated into the landscape:

We’ve paid just as much attention to the outside as well. The exterior takes into account the local architecture so that it fits in well with its surroundings. We’re planting a ton of trees on the grounds and more on the rooftop garden that spans the entire building. The raw, unfinished look of our buildings means we can construct them quickly and with a big emphasis on being eco-friendly.

The environmentally sound building thing is at this point practically a cliché of tech culture. Google’s campus is eco-friendly. Apple’s campus is eco-friendly. This is the Bay Area after all. But there’s a second and slightly more sophisticated thing going on here too. In the past few decades there’s been a resurgent interest in architecture in forms that blend into the environment rather than standing out. The interesting thing about this tendency in architecture is that it’s presented by its supporters as a form of ecology — but for the visual environment, not the living one.

This can mean a building that uses visual elements of a region’s vernacular architecture. The statement notes that the buildings will look “raw” and “unfinished,” and that this will make them more environmentally friendly; this recalls perhaps the most ancient kind of vernacular architecture, a temporary dwelling. But it can also be a building that blends into the natural world itself — a building wearing a sort of camouflage, as it were. It’s a little hard to tell from the images Facebook posted of the models, but Gehry designed the campus expansion to blend into the landscape. As Zuckerberg noted in a post on his Facebook wall, “From the outside,” the new building “will appear as if you’re looking at a hill in nature.” Even more so if the trees planted are local varieties (we’ll see).

Why all this emphasis on visual ecology? It seems weird for a tech company to focus on integrating its building visually into the natural environment, or to use a “primitive” seeming building style…

But Facebook’s…critics often tar it for separating us from the world around us, visual and otherwise. More and more, they say, we choose the screen — a virtual world, both flat and infinitely deep — over the physical world, including natural landscapes.

I imagine that somewhere in the minds of the Facebook executives who worked with Gehry on the plans is the idea that Facebook needs to cover up or combat this sense that it separates us from reality. A new building that presents itself as a non-invasive insertion into a pastoral landscape is a clever visual move. Facebook isn’t sucking you into the screen; no, the company’s holistically integrated with the natural and physical worlds.

Or so says the aesthetics of its headquarters.

The interior layout, per what we know about the plans, will reflect the management style we’ve come to associate with start-up culture:

Just like we do now, everyone will sit out in the open with desks that can be quickly shuffled around as teams form and break apart around projects. There will be cafes and lots of micro-kitchens with snacks so that you never have to go hungry. And we’ll fill the building with break-away spaces with couches and whiteboards to make getting away from your desk easy.

This is practically a spatial representation of the startup ethos. It’s nonhierarchical — “everyone will sit out in the open,” with no spatial differentiation (e.g. separate offices) of higher-ups. It’s designed to react “quickly” based on need, a key advantage of startups over creakier, older companies. And it will of course employ the research-derived productivity best practices that have risen to prominence over the years. “Getting away from your desk” for a creativity-boosting break will be easy, for instance.

…It may also be a way of announcing Facebook as a media outlet whose cultural resonance is on par with that of institutions in the world of “high culture.” Note that the Facebook page for the redesign mentions two art-world-related commissions — the Guggenheim and the Walt Disney Concert Hall in L.A. But even as the Gehry choice positions Facebook as a cultural institution, of course, Facebook is rewriting the rules of what it means to be one. It’s radically populist and in many ways radically decentered. It does not act as arbiter, allowing the mass to perform that function instead by way of likes and recommends.

So maybe Facebook isn’t signaling its arrival as a top-tier cultural force with the use of Gehry. It already is one, at least in the sense of its scope; and it will never be one in the sense of the exclusivity of the culture it mediates. The Facebook choice of Gehry indicates not just a total collapse of the high culture-mass culture distinction, but the banality of that collapse, or maybe the fact that there’s nothing to collapse anymore. Postmodernism took pains to point out when it was mixing low and high culture; for a company like Facebook the distinction is irrelevant and uninteresting.